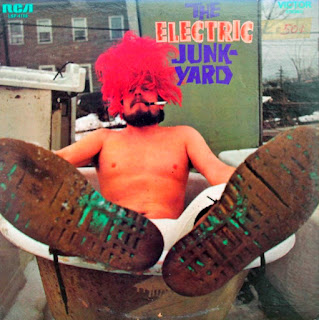 From Allmusic: The Electric Junkyard shows up occasionally in Moog sections but is not an electronic album. Instead, electrified horns and recording techniques ("nine months alone were spent experimenting") are supposed to justify the name and concept. But the result is an album of fun but standard blues-based dirges, items a Lalo Schifrin or Les Baxter might have written for the jukebox scene in a biker movie. There are interesting touches, such as female laughter; arranger Frank Hunter had arranged abstract female vocals in an exotica album a decade earlier (as had Les Baxter). Fans of progressive 1960s rock looking for new kicks could do much worse, but it would be no surprise to learn that the Electric Junkyard sold in the dozens.