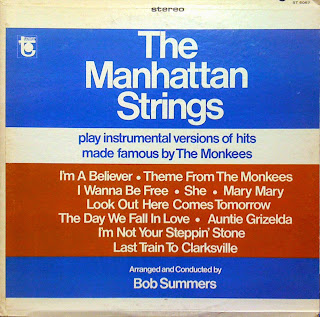 In my continuing quest to sop up anything on the Tower label, here's a record that features instrumental interpretations of early songs by the Monkees. It says on the back cover that arranger Bob Summers was also also the leader of the 18th Century Concepts, as well a conductor for Mary Ford and Terry Stafford. Exploito-meister Mike Curb produced. Update: songs are now broken into individual tracks.